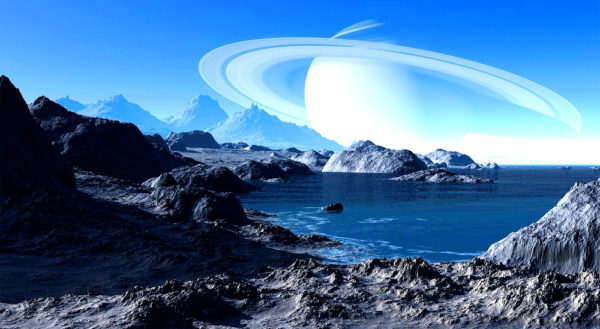 Saturn enters Aquarius for the duration on Dec. 18, 2020. Saturn will be in Aquarius, until the ringed planet starts its exit dance starts March 2023.

Saturn and Venus this year in conjunction!
What says th’ almanac to that?

That means it’s possibly the most stubborn of the air signs yet still displays that airy ability, the mental agility, a certain facility to adjust to new circumstances. The planet associated with Aquarius is Uranus, with an 84-year orbit, but a planetary rotation that is nearly perpendicular to the rest of the planets, it’s an odd planet. In older schools of astrological thinking, Saturn was associated with Aquarius, but more modern versions stick with the Uranian influence as being paramount. To me? Kind of obvious, that planet that’s near-90° off and the obtuse Aquarian energies.

Consider, there’s astronomical evidence of a ring around Uranus, much like the rings of Saturn, only smaller, more like a belt than the rings we see. So Uranus is the governing planet and Saturn is honored and visiting.

The fixed signs — Taurus (earth), Leo (fire), Scorpio (water), and Aquarius (air) — all face astrological pressure from Saturn. Starts mid-December. These are tension angles, and while not always bad, do present some challenges.

In a natal chart, Saturn suggests structure, or where one craves stability.

But by transit, Saturn is a teaching tool. Previously, see BareFootAstrology.com, I used the example of the old New Year icons, the baby and the old man with a scythe — as that scythe is one source of the glyph for Saturn, the Sickle of Chronos. So it’s death and rebirth, and a certain reckoning.

There’s one other observation, throw it in the mix, as Saturn and his scythe? As a planet, Saturn both removes and rewards, and regrettably, in that order. With the sickle, Saturn cuts down that which no longer serves us, and then, when the trimming is done, there are the rewards. Keep that in mind, with Saturn by transit, I look for rewards in exchange for hard work. Toiling in obscurity, only to be an overnight sensation — after a couple of years of hard work.

The last time there was a big Saturn transit through Aquarius was February 1991 through May 1993.

Those people born in that window see their Saturn Return occurring in these next years. It’s the first of a series of planetary cycles that describe “growing up,” and entering “adulthood,” in one form or another. It kind of depends on the individual’s natal chart, planet placements, and locations.

Aquarius is the sign of the water-bearer. Aquarius is not a water sign. That marvelous, soaring intellect needs some structure (Saturn), some studious hard work (Saturn), and some useful direction (Saturn) in order to thrive and succeed. But Aquarius is also a natural rebel, and there will be some elements of opposites.

Saturn also performs a service like a cosmic check-up. All of these fixed signs, Taurus, Leo, Scorpio, Aquarius, all of them will be getting that review thanks to Saturn. Where are you going, what are you doing, and what do you want to be when you grow up? Typical questions.

As Saturn applies pressure, this is easiest to see as part of a 28-year cycle, and where that falls depends on the individual chart, but the “fixed parts” in a natal chart get the Saturn treatment, which is all about making sure we’re working hard. Diligently striving towards a singular goal that is good for us, individually, and good for humankind, as a whole.

Soaring intellectual capacity meets the need to be a little more structured in its approach.

Ideas that flit about on the wings of angels are wonderful, but taking those ideas and taming them into useful, real-world applications is what Saturn — in Aquarius — is about. Got a few years, and the notion that Saturn is here to teach is what this is about.

Using Shakespeare’s Prince Hal, the opening quote is a personal favorite, having watched one actor deliver the passage ironically, on stage, perfect beat. Using that opening quote, though, and that set of plays, the so-called Shakespeare Henriad, as it starts with Richard II, the eponymous character abdicating his throne, then Henry IV, parts 1 & 2, as Henry IV tries to shore up the linage and solidify his rule, and ends with Henry V, Prince Hal, conquering France, and bringing a temporary peace to the region.

A bunch of English history acted out on stage. In a more modern era, “Based on real events,” or even historical fiction.

Following Prince Hal’s trajectory, through the plays, as he matures, and starts to accept the responsibilities of his position?

There’s a little-known, 1991 movie called, “My Own Private Idaho.” Title drives from the B-52’s song, same title. The movie is loosely based on that Shakespeare tetralogy of plays, mostly Henry IV parts 1 & 2. I recall, I saw the movie unaware of its Shakespeare connection at first, but towards the end of the film, Keanu Reeves delivers a speech I recognized from the play, and in part?

Reply not to me with a fool-born jest,
Presume not that I am the thing I was,
For God doth know, so shall the world perceive,
That I have turn’d away my former self;
So will I those that kept me company.

Prince Hal was a privileged child running amok in the bars and brothels of old London. When his father died, Henry IV, Hal becomes Henry V, and the rest is history. A misspent youth, or what we might call, “youthful indiscretions?”

Prince Hal transmutes into a real leader, Henry the Fifth. I have to wonder if there is a Saturn influence in the play.

That passage, though, shows what’s up with Saturn as it enters Aquarius. Odd coincidence? The last time Saturn was in Aquarius was when that film was released.

Born and raised in a little town in East Texas, Kramer Wetzel wandered all over the southwest until finding a spiritual home in South Austin. From that creative cauldron, Kramer’s astrology, horoscopes, and occasional teachings reach across the globe. Kramer can be actively found at venues in the Austin and San Antonio, Texas area. Kramer Wetzel is available for chart consultations at astrofish.net/shop.

Thank you so much Julia. I have been a fan on your page on Facebook for quite a long time now :) and before using your advertising last October, had been on your site / newsletter list frequently. I appreciate your help!